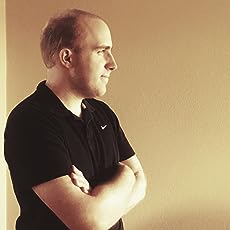 Q: So, you have successfully launched an entire fictional universe, lovingly described as “The Afterverse.” Can you give us a summary of what this means and the major players involved?

A: The Afterverse is an alternate universe in which practically every fairy tale, myth, legend, and classic story in existence is a real historical event. This combination of stories has led to the development of a “modern” world similar to our own in many ways…except that magic and magical creatures exist in the Afterverse. Currently, I have two series of books set in this world. Beaumont and Beasley takes place in the 1920’s E.A. (Ever After) and revolves around the adventures of detective-turned-Beast Nick Beasley and enchantress Lady Cordelia Beaumont. They investigate cases pertaining to fairy tales and other European mythology. Crockett and Crane is set in the Old West of the United States of Neverica (during the 1890’s E.A.) and centers on monster hunter Todd Crane and U.S. Marshal Amy Crockett. It involves American folklore and legends. I’ve also written a number of short stories and spinoff concepts that delve deeper into other eras and settings in the Afterverse.

Q: Your next releases in the Afterverse are “Deadwood” and “The Gepetto Codex.” Can you tell us a little more about each of those?

A: Deadwood (releasing June 30) is Book 2 of Crockett and Crane, while The Geppetto Codex (release date TBA) is Book 5 of Beaumont and Beasley. However, they actually retell the same story—the tale of Pinocchio, which has something of a darker edge to it in the Afterverse (not that the original wasn’t fairly dark already). In Deadwood, Todd Crane and his friends fight to save a town from a mysterious magical entity that can possess and control wood, which is a lot scarier than it sounds. The Geppetto Codex focuses on two characters who have remained on the sidelines in the Beaumont and Beasley series thus far: Gareth Llewellyn (a faun) and Sylvia Kirke (a dryad). They travel to Vetri (the Afterverse equivalent of Venice) to investigate sightings of mysterious monks who have the power to transform people into wooden statues. This book also builds on the mystery of Dr. Jekyll and Mr. Hyde, a character who was introduced in the previous Beaumont and Beasley installment, The Hound of Duville and Other Stories.

Q: What are – broadly speaking – your future plans for the Afterverse?

A: The Beaumont and Beasley series will run to at least fourteen or fifteen books. I know how the overall story will end, but I’m not in any big hurry to get there. I’ll write as many books as this series needs to do justice to all the character arcs and storylines that I’ve introduced and give them closure. Books 1 to 3 form a sort of introductory trilogy for Beaumont and Beasley. Books 4 through 8, when complete, will constitute a storyline I’m calling “The Jekyll Saga.” This arc will bring a number of the plot threads begun in the earlier books to a close, though not all of them. A third major arc will begin in Book 9 (title TBA), and a fourth and final arc will bring everything full circle and complete the story begun in Book 1, The Beast of Talesend.

The big storylines which started in Crockett and Crane Book 1, Horseman, will conclude in Book 3, Westenra, to form a self-contained trilogy. However, the series will continue after that with installments that are more stand-alone and less arc-heavy. I have a lot more folklore from this side of the pond that I’d like to use. Book 5, for example, will focus on Canadian legends and history.

I have other Afterverse projects in the works, as well. The Blackfire series, which features my fan-favorite dragon Malcolm Blackfire as a main character, will run to at least five planned books; possibly more. I’m also working on a more modern urban fantasy series with Afterverse elements called “American Gargoyle.”

A: Yes, that was a lot of fun to write. I wanted to bring something new to the writing-advice market, so I decided to flip writing advice on its head. Not Write Now will explain to you exactly how to avoid writing, but in the process, you just might find yourself writing more than ever before. It’s the book I wish I’d had when I started this journey…because at that point, I genuinely did want somebody to tell me to quit writing so that I wouldn’t be in a constant battle with my inner critic. My hope is that Not Write Now will be the kick in the pants that will help some authors out there to stop listening to their inner critic.

Q: Are you planning to add more non-fiction to your author resume? Give us the scoop on that.

A: I do have one other nonfiction book planned at the moment. It will be called Character Boot Camp, and it will essentially be a bunch of fun exercises authors can use to bring depth to their characters so that they feel like real people and not just cardboard cutouts. It will be in the same humorous vein as Not Write Now. This book probably won’t be released until early 2020, however. Beyond that, I don’t currently have any other nonfiction plans, but I would like to add more titles of this nature to my platform eventually.

Q: In recent months, you’ve made some changes to your platform (for example, shelving the podcast, increasing free stories to newsletter subscribers, relaunching books, adding a Patreon, etc.). For the benefit of other writers considering any or all of these approaches, could you discuss a bit what the decision making process was on what to keep and what to let go of?

A: In general, I try to make sure that my writing always comes first, which is what I would advise other authors to do as well. It’s very easy to fall down a rabbit hole of some other aspect of indie publishing and leave the actual writing process behind—or at least, it is for me. And there are some things, like marketing and a certain degree of social media activity, that we can’t really forgo as authors if we want to be successful. All the more reason to make sure the core of our platforms doesn’t veer away from simply producing good stories. I’ve learned not to bite off more than I can chew in terms of side projects. The podcast was very time-consuming, and while I enjoy writing nonfiction books now and then, I don’t see myself ever committing to a weekly audio production like that again. I know there are many people who manage to maintain a podcast in addition to a fiction-writing career, but I definitely don’t have enough time for both. Boosting my newsletter freebies, on the other hand, is something with a tangible return that doesn’t require me to take time away from story-crafting. Relaunching my books late last year took a lot of time and effort, and it did require me to postpone drafting new books for a while, but it made a big difference for my visibility and sales. The Patreon has thus far been a rewarding addition to my platform which grants me both an additional income stream and another avenue for interacting with fans. However, I paused the Patreon over the months of May and June because I knew I couldn’t do the short stories I was releasing there justice while also working on the full-length novels that many of my readers have been waiting for. In the end, there’s always a delicate balance between reaching new readers and giving current readers what they deserve. If a particular project disturbs that balance, I know it’s time to make a change.

Q: Finally, because this is a topic we don’t get nearly enough updates on, please tell us how Muffin the dog is doing.

A: She is doing marvelously. I just got her a kiddie pool to splash around in, which makes a big difference during the hot summer months in the Idaho desert. She loves it. And it tires her out, which allows me to have undisturbed writing sessions in the late afternoon and evening while she sleeps.

You can visit Kyle at: